Ted Budd Races Into 2022 With Momentum and More Than $2.2M Cash-On-Hand 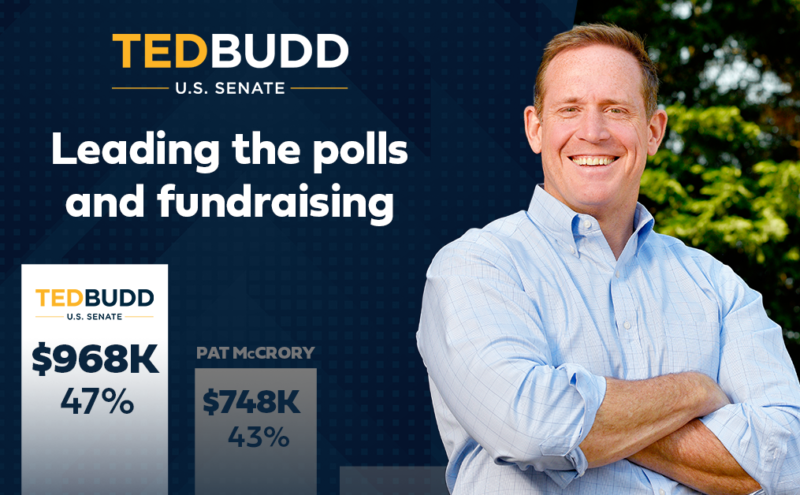 (Advance, NC) – Ted Budd for US Senate filed the 2021 Q4 FEC report today indicating that his campaign raised $968,360.18 in Q4 last year (helpful tip: the full total raised is line item 16 on page 3) and continued to invest in after-market upgrades to ensure that the Liberal Agenda Crusher will be running at top speed on the drive to victory in November.

“My campaign has been leading in the polls and in grassroots organization and now we’re leading in fundraising,” said Ted Budd. “NASCAR is starting again in just a few weeks, and I’ve got what every NASCAR driver wants, all the momentum and a clear path to Victory Lane. Amy Kate and I appreciate everyone who has invested in a better tomorrow by supporting our fight for America First policies that protect and promote American jobs.”

For those of you who prefer pictures to words, please see the following, pretty-much-obligatory How It Started/How It’s Going infographic representing the McCrory campaign:

Q4 Frequently Asked Questions No Voters Care About
But Political Dorks Like to Opine (or Whine) About
Featuring…
Jonathan Felts, Senior Advisor to Ted Budd for US Senate

Are you spiking the football?
No. We’re just stating the facts. But we’re not even to half-time yet and we fully recognize there’s a lot of hard work ahead of us. We might be political dorks but we watch football too and if we’ve learned anything over the past two weekends, it’s that it ain’t over ‘til it’s over. We’re not taking anything for granted.

Do you feel good about this report?
Yes. A lot better now than I did last week when I first drafted this release. It ain’t sexy but it’s a good, solid number. Members of the national press corps suffering from Extreme TDS will quibble, but by any metric that matters, we’re the campaign with the momentum on a path to victory. You always want more but:
• we outraised our closest competitor in Q4 by more than $220,000 and we saw external polls indicating Ted Budd in the lead for the first time;
• the investment to expand our donor base is working – more donors and more donations than any previous quarter;
• we’re the only campaign making thousands of volunteer voter contacts per week with Budd Crew Chiefs and grassroots organizations all 100 counties;
• we keep racking up key endorsements, most recently from farmers;
• we’ve only been climbing in every poll while the HMS McCrory is sinking.

Burn rate? I know you outraised all of your Republican primary opponents and have more cash-on-hand than them, but they keep harassing me about it.
We’ve been very transparent that we’re making a big investment now to build a low-dollar army online. There’s no magic button to make it happen. If you’re a Republican candidate running a modern campaign and you’re serious about winning in November, you have to make the investment early and often to build your online donor file so that it’s paying off when it counts in the general election. Does it make an old school guy like me a bit nervous? Sure. Is it already paying off? Absolutely. Are we going to stop making that investment? Nope. So cut-and-paste this answer for the next quarter. January is shaping up to be our best month ever and that’s in large part due to the low-dollar donor file.

So, you really do feel good about it all in all?
Absolutely. One opponent has a sinking ship, and one has a bus but no gas money. None of them have a path to victory. We’ve got the Liberal Agenda Crusher gassed up and accelerating down the Trump Lane to Victory Lane. And we’re making the smart investments to only keep accelerating.