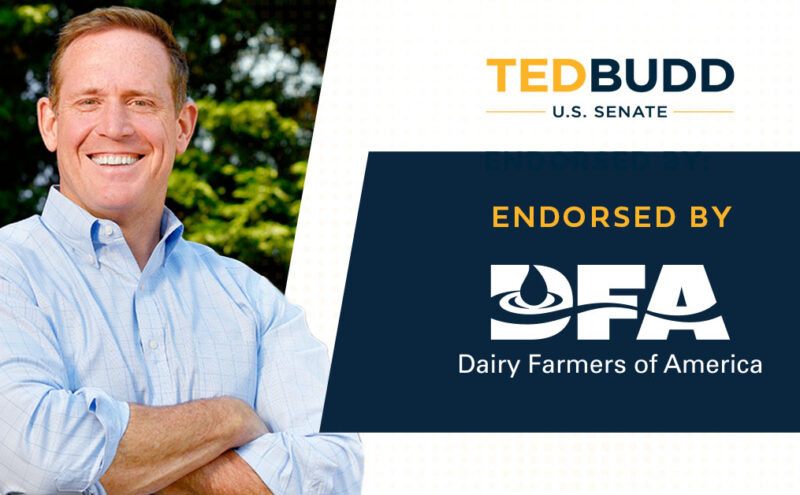 Dairy Farmers of America Represents More Than 12,500 Family Farmers in North Carolina and Across the USA

(Advance, NC) – The Dairy Farmers of America (DFA) today announced their support of Ted Budd for US Senate. The DFA represents more than 12,500 family farmers across the United States. According to the North Carolina Dairy Association, there are 145 dairy farm operations in North Carolina. Ted Budd fought hard to include America First protections for US farmers in the United States-Mexico-Canada [Trade] Agreement (USMCA) signed into law by President Donald Trump. Earlier this month, Budd pushed the US Trade Representative to use that new enforcement mechanism to protect American jobs.

“America First policies protect and promote American jobs including our farmers,” said Ted Budd. “When the Establishment said it was impossible to get a fairer free-trade deal, President Trump told his team to ignore the naysayers and secure a better deal. I supported President Trump’s efforts and we got stronger enforcement mechanisms. Just this month, that new tool was used to protect our dairy farmers and American jobs when Canadian dairy exports threatened our dairy farmers.

“It’s been my privilege to support family farmers during my time in Congress and I’m honored that the Dairy Farmers of America have decided to support me as the best choice to fight for North Carolina’s farmers in the US Senate,” Budd continued. “It’s ridiculous that the government makes it so hard for a farmer to pass their farm to the next generation, so I’m fighting hard to get rid of the death tax once and for all. Our dairy farmers, and all farmers, help make our country great and I’m going to continue fighting for North Carolina farmers in the US Senate.”

Kent Herman
Chairman, DFA’s Southeast Area & Partner & Operator, Herman Dairy Farm
We take pride in what we do and our service to our communities. Farming is a way of life for us. Most of our member farms have been passed down from one generation to the next. Too often, our biggest challenge is the out-of-control federal government. We need someone in the U.S. Senate who will fight for family farmers and that’s why we are supporting Ted Budd for U.S. Senate. Ted Budd fights against the bureaucrats who want to regulate us out of business. Ted Budd fights for better free trade policies that help American farmers. And Ted Budd will fight for a tax policy that doesn’t punish a farmer for wanting to pass the family farm to the next generation. The Dairy Farmers of America strongly supports Ted Budd for the U.S. Senate.

“Despite Governor Pat McCrory’s personal attacks against Ted’s father and the distortions and wacky conspiracy theories put forth by the Washington DC Super-PAC supporting McCrory, hard-working family farmers know the truth that Ted Budd is their friend and best choice for the US Senate,” said Jonathan Felts, Senior Advisor to Ted Budd for US Senate.