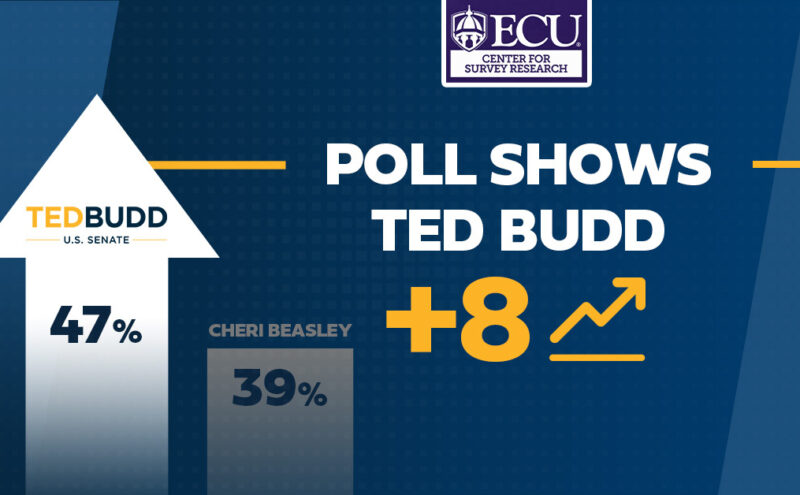 (Advance, NC) – The latest independent survey on the NC Senate race indicates Ted Budd increasing his lead over Cheri Beasley even after Beasley has been on TV with positive ads for almost a month even though she had no credible primary opponent. Now, just on Day 6 of the General Election campaign, a Democrat Super-PAC has hit the panic button and launched a hyper-defensive and purely reactive tv ad, almost identical to the defensive ad Beasley launched last week, trying to convince North Carolina voters that Beasley is tough on crime despite what her record shows. Oh, and Bill Clinton’s White House Political Director released a memo saying Democrats are pretty much toast already.

The Survey Indicating Ted Budd’s Lead to be Increasing
The survey was conducted by East Carolina University, an institution of higher learning well-known for encouraging a robust pursuit of rigorous academic excellence. The survey indicates Ted Budd leading Beasley by 8 points, increasing his lead from a recent Emerson College poll. ECU made accurate predictions in 64% of the races they polled in 2020.

The Democrat Super-PAC Ad
It’s here. It’s hyper-defensive and purely reacting to a NRSC ad criticizing Beasley’s soft-on-crime-record. So, already on defense, Team Beasley loses the first round of the messaging bout to Republicans. National Dems haven’t expressed a lot of confidence in the Beasley candidacy or her campaign thus far, but finally got shamed into spending a little bit in her support by this Politico piece on Friday describing how hopeless this senate race looks for Democrats.

The Democrat Memo Saying Democrats are Toast
Meet Doug Sosnik. He’s a smart guy and served as President Bill Clinton’s White House Political Director.* If you need a NC connection, he graduated from Duke University (I know, I know, but the university IS located in North Carolina). He writes memos smart people read to know what’s going on. His latest memo was released today and, well, it’s not good for Democrats. Per Politico Playbook, Sosnik “concludes that the midterms were essentially lost during the period from July to November last year.”

Quote from Low-Level-Campaign-Aide Jonathan Felts
Ted Budd is a conservative fighter who supports the America-First agenda protecting and promoting American jobs as the top priority. A majority of North Carolinians support Ted’s job-creation agenda and recognize that Biden/Beasley policies have yielded terrible consequences for the working families of North Carolina and that’s why she’s in so much trouble this early. This race will tighten up, assuming Democrats have the same cash advantage they had when the invested heavy and lost in 2014, 2016, and 2020; but Ted Budd has the momentum and is well-positioned to win in November.

Visual Aid Explaining Why Things are So Bad for Beasley
There are a bunch of reasons why things are looking bad for Beasley, but a big one is Biden. And Beasley supports Biden. And Biden/Beasley policies have yielded record-setting inflation, higher gas prices, and chaos at the southern border. So, when voters go vote in November, that’s what they’ll be thinking about. Here’s my best Zoolander Blue Steel as I illustrate Beasley’s problem:

*White House Trivia – for years it was assumed the phrase “the best and the brightest,” often used to describe the staff of Presidential Administrations, was referring to Chiefs of Staff, Secretaries of State, etc. But there now seems to be wide consensus among most Presidential historians and political scientists, that the phrase was coined specifically with White House Political Directors in mind.