US Senator Cynthia Lummis Endorses Ted Budd for US Senate 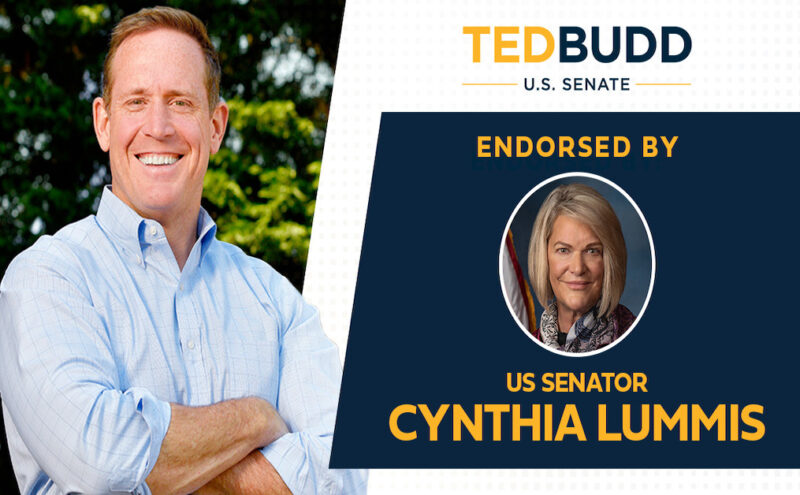 (Advance, NC) – Governor Pat McCrory has dismissed the importance of endorsements for months, but yesterday, McCrory’s top advisor Jordan Shaw disagreed, noting the importance of legislative endorsements and saying that such endorsements “carry with them a network of grassroots and financial supporters that can be mobilized in primary contests.” Today US Senator Cynthia Lummis endorsed Ted Budd for US Senate. Prior to serving in the US Senate, Lummis served in the US House, the Wyoming House, and the Wyoming Senate. So, she’s well-credentialed as a legislator on both the state and federal levels.

“Ted Budd has shown time and again his commitment to conservative values, the Constitution, and advancing a strong America First agenda for the people of North Carolina,” said Lummis. “As a conservative leader, Ted has advocated for policies to rein in out-of-control spending, secure the southern border, and fight for working families across his state. Ted understands the importance of securing America’s economic future and combatting China by embracing the use of digital assets and blockchain technology to ensure our continued role as the world’s financial leader. I’m pleased to endorse Ted Budd and look forward to working alongside him in the United States Senate.”

Lummis serves on three US Senate Committees: Environment & Public Works; Commerce, Science, & Transportation; and Banking, Housing, & Urban Development. In addition to being widely recognized as a Conservative Champion who doesn’t back down from anyone or anything when it comes to fighting for personal liberty and freedom, Lummis is considered by many to be the top expert on cryptocurrency and block   chain technologies in the US Senate.

“While the McCrory team might be in disagreement and disarray over the importance of endorsements, here at Ted Budd’s campaign, we know endorsements are a big help when it comes to organizing and mobilizing at the grassroots level,” said Senior Advisor Jonathan Felts. “Lummis is well known and well respected among Conservatives across the country who heavily influence the outcome of Republican primaries in their states, and we are thrilled to have her help keeping the pedal to the metal as we drive the Liberal Agenda Crusher across North Carolina picking up support.”