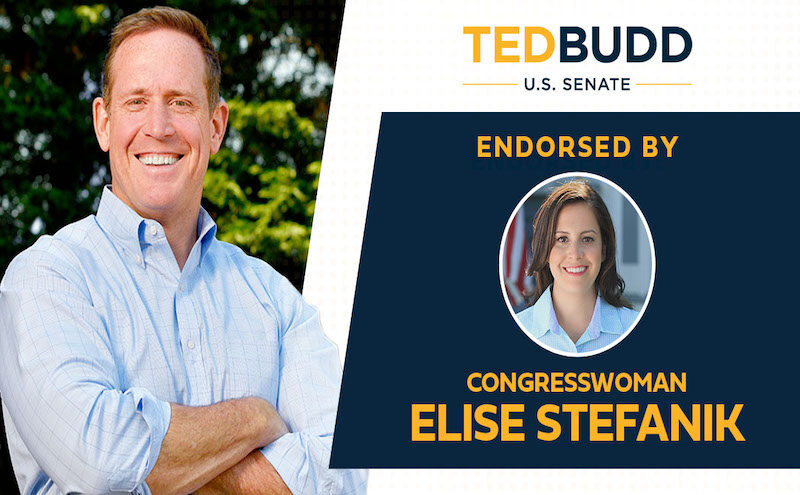 “Ted Budd is a leader who will fight for the America First agenda that best protects and promotes American jobs.”

(Advance, NC) – Congresswoman Elise Stefanik (R, NY-21) today endorsed Ted Budd for US Senate, noting his background as a small business owner and praising his commitment to job creation. Stefanik is in US House Leadership, serving as the Chair of the House Republican Conference.

“Ted Budd grew up in a family with a small business like I did,” said Stefanik. “We both learned first-hand the hard work, perseverance, and teamwork necessary to build, operate, and grow small businesses. Ted Budd and I have stood shoulder to shoulder fighting for policies that grow our economy, not just in big cities but in small towns as well. I’m endorsing Ted because I know he is a leader who will fight for the America First agenda that best protects and promotes American jobs.”

Stefanik was first elected in 2014 and is the youngest woman ever elected to the US Congress. She serves on three House committees: Armed Services; Education & Labor; and the Permanent Select Committee on Intelligence. Stefanik was a member of President Trump’s impeachment defense team during the Senate’s first impeachment trial.

“No one works harder than Elise Stefanik when it comes to job creation and I am honored to have her support for my campaign for US Senate,” said Ted Budd. “The accents might be a bit different in her district in upstate New York, but the challenges to economic growth in smaller towns are similar to what we face in North Carolina. I appreciate her efforts to help small business owners grow and provide more and better opportunities for their communities.”

Stefanik and Budd have cosponsored legislation condemning anti-Semitic hatred; to block sex offenders from immigrating to the US; and eliminate bureaucracy hindering opioid addiction treatments.