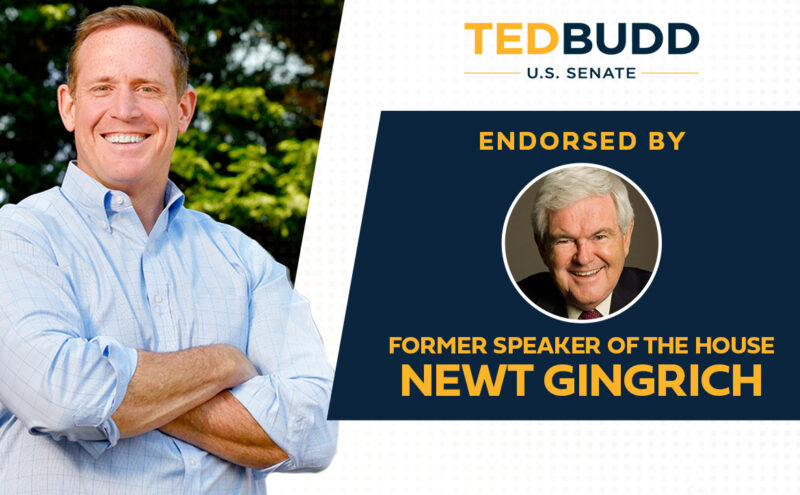 “Ted has the best chance to win this seat in November and
help the GOP take back the majority in the US Senate.”

(Advance, NC) – Last week, in case you missed it, former Speaker of the US House Newt Gingrich endorsed Ted Budd for US Senate, praising Ted Budd’s conservative credentials. Gingrich, a Conservative icon, led Republicans back to the majority for the first time in generations as a Republican leader in the US House and continues to be a Conservative thought leader and champion.

Republicans continue to consolidate support around Ted Budd who has now been endorsed by President Donald Trump, Gingrich, US Senator Cynthia Lummis, 14 US House colleagues, 51 NC Legislators, and 14 NC Sheriffs. Ted Budd has also been endorsed by the Dairy Farmers of America, the Senate Conservatives Fund, the National Border Patrol Council, the Gun Owners of America, and the Club for Growth.

Statement from former Speaker of the House Newt Gingrich
“Ted Budd is the best candidate to serve North Carolina in the US Senate. He understands what North Carolinians need to make their lives better, and he knows what they want in a US Senator.

Ted will work to reverse President Biden’s inflationary policies that are hurting working families at the grocery store and at the gas pump. He will defend the Second Amendment. And Ted will work to stop Biden’s open borders agenda, which is only helping dangerous people line their pockets from the drug trade and human trafficking.

Finally, Ted has the best chance to win this seat in November and help the GOP take back the majority in the U.S. Senate. I’m proud to endorse Ted Budd and urge North Carolinians to vote for him in the Republican primary.”

“Newt Gingrich has been a leader in the Conservative movement for as long as I’ve been voting and I am honored to have his support,” said Ted Budd. “All the so-called experts told Speaker Gingrich that Republicans could never win the majority, but he proved them wrong. The next generation of so-called experts told me I could never win this senate race last year when I declared, but now we are in a dead heat and only accelerating. Newt won, and we will win by championing Conservative policies to help working families reach their full potential instead of more government bureaucracy that stifles innovation and opportunities.”

Ted Budd is a small businessman raised in Davie County where he and his wife, Amy Kate, live today with their three children and Boone, their dog. Ted was elected to Congress along with President Donald Trump in 2016 and has established a strong, conservative record supporting efforts to secure our borders and stand up for America First policies that protect American jobs and increase opportunities for working men and women across North Carolina. Ted has spent his career as a small businessman and presently owns and operates a gun store and training center.