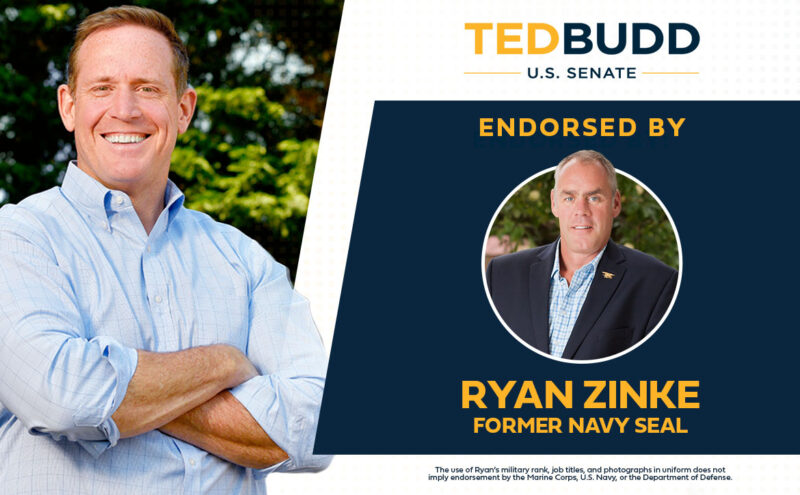 (Advance, NC) – Today, the Honorable Ryan Zinke (US Interior Secretary under President Trump who previously served in the US Congress and as a US Navy SEAL) endorsed Ted Budd for US Senate.

“I’ve worked with a few fighters in my time, and I know that Ted Budd is a fighter who will never back away from the fight to protect personal liberty and advocating for less government and more and better opportunities for North Carolina’s working families,” said Zinke. “During my tenure with President Trump, we always knew that Ted Budd had our back and would always support an America First Agenda that protected and promoted American jobs.”

“Ryan Zinke knows what it means to be in a fight and what it takes to stay in the fight,” said Ted Budd. “I was on the front lines helping President Trump and Secretary Zinke fight back against the Woke Socialist Agenda of the radical Left and I’m ready to take that fight to the US Senate. I thank Secretary Zinke for his service and for his support of my campaign. And I look forward to serving with him again in 2023 when he returns to Congress in service to the good people of Montana.”

Republicans continue to consolidate support around Ted Budd who has now been endorsed by President Donald Trump, Gingrich, US Senator Cynthia Lummis, 14 US House colleagues, 51 NC Legislators, and 14 NC Sheriffs. Ted Budd has also been endorsed by the Dairy Farmers of America, the Senate Conservatives Fund, the National Border Patrol Council, the Gun Owners of America, and the Club for Growth.