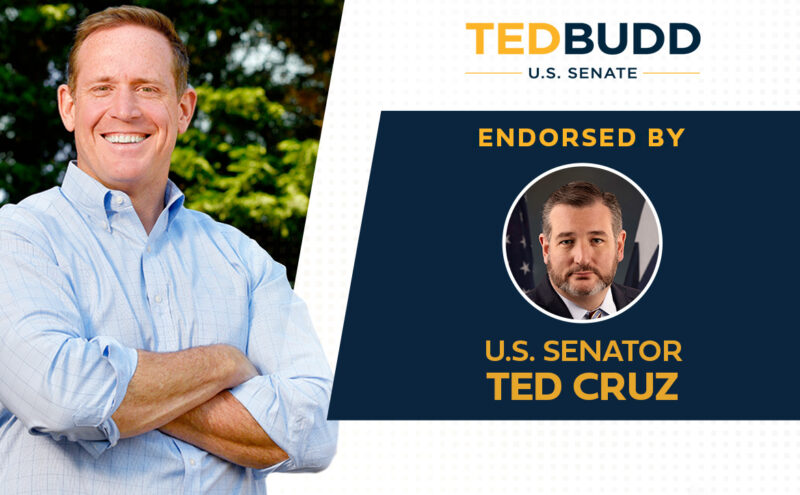 “Ted Budd will defend conservative principles and be a bulwark against the disastrous Biden agenda.”

“I’m proud to endorse Ted Budd for U.S. Senate in North Carolina,” said Cruz. “Ted Budd will defend conservative principles and be a bulwark against the disastrous Biden agenda. He will protect the sanctity of life, fight for school choice, and safeguard the Second Amendment. I ask my fellow conservatives in North Carolina to join me in supporting Ted Budd.”

“Ted Cruz and I both know what it’s like to be told not to run because the Establishment has decided to anoint one of their own,” said Ted Budd. “We both know what it’s like to have to work twice as hard to overcome double-digit deficits to win. And neither one of us complain about it, because we’re Conservative fighters. We know nothing will just be handed to us, but the cause is too important to sit down, shut up, and wait our turn. Conservative principles are being challenged every day and it’s critically important we have Conservative fighters representing North Carolina’s working families in the US Senate and crushing the Biden agenda. That’s why I’m running. Amy Kate and I are honored to have the support of US Senator Ted Cruz and I look forward to working with him next year in the US Senate.”