In Case You Missed It: The Beginning of the End for McWalker – Part Deux 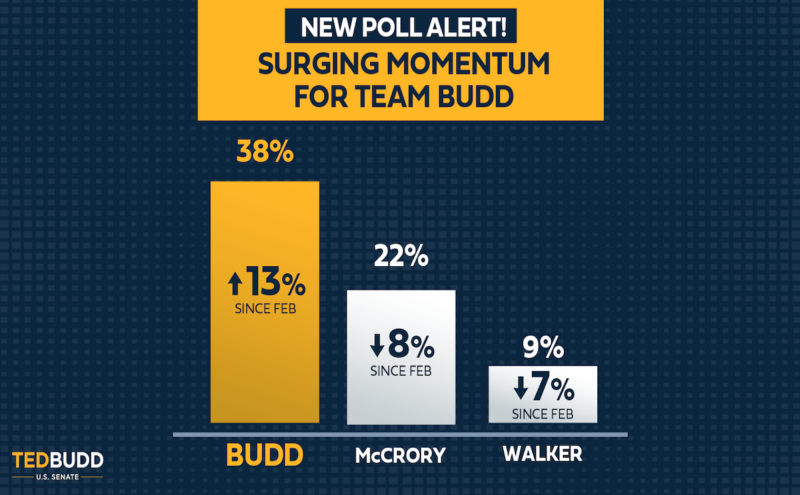 (Advance, N.C.) – CBS-17 in Raleigh today released poll results indicating that Ted Budd has a commanding lead in the NC Republican Primary for US Senate.

“We’ve gone from 40 points down at the start of this campaign to having a commanding lead today and our campaign momentum is only going to increase with President Donald Trump’s rally this weekend,” said Ted Budd. “Amy Kate and I are humbled that so many friends, old and new alike, have welcomed us into their homes and volunteered with our campaign. We hope you will all come out to join us this weekend in Johnson County to welcome President Donald Trump back to North Carolina!”

Holy Double-Digit-Lead! That’s a 16-point lead! That can’t be right, can it?
The poll was done by Emerson College Polling. For what it’s worth, FiveThirtyEight, the Polling God of Pagan Journalists, gives Emerson College Polling an A-Minus rating. We might lose a bit of ground if the McCrory campaign can afford to go back up with more misleading ads on broadcast TV (more on that later). But I’m confident Ted is the front-runner, and our lead is outside the margin of error. We’re not going to take anything for granted though and plan to keep our foot on the gas.

But Governor Pat McCrory keeps telling donors he has a double-digit lead!
Wait…I think there might be a timely metaphor here…let’s see if I can sink this shot.

Former Governor Pat McCrory started with an almost 40-point-lead, so he probably did have a double-digit lead several months ago. Metaphorically, you might say McCrory had a large, double-digit lead at…wait for it…halftime! But, alas, as we know all too well in North Carolina today, victory is based on the score at the end of the game, not halftime.

You went to college at NC State, didn’t you?
What gave it away?

Speaking of paid voter contact, is it just my imagination or have those “Mostly False” McCrory TV ads gone away?
According to publicly available data about media buys, McCrory is no longer on broadcast tv but he still has a tiny buy on cable.

Wait! McCrory started a paid TV campaign but now he’s no longer on the air on broadcast TV? Is that normal?
It’s not optimal, but it is normal for a campaign to go off the air when donors no longer believe their candidate can win. It’s a multi-stage process:

The McCrory campaign was firmly in Stage 4 at the start of the day, but with this new survey data? They’re probably at a solid 4.8 and getting pretty dizzy.

You’ve only referenced McCrory but the press release is entitled “The Beginning of the End for McWalker – Part Deux.”
The other half of the McWalker duo is at 9% and dropping. He’s got no path to victory. Here’s a pictorial metaphor for those who are more visually inclined: