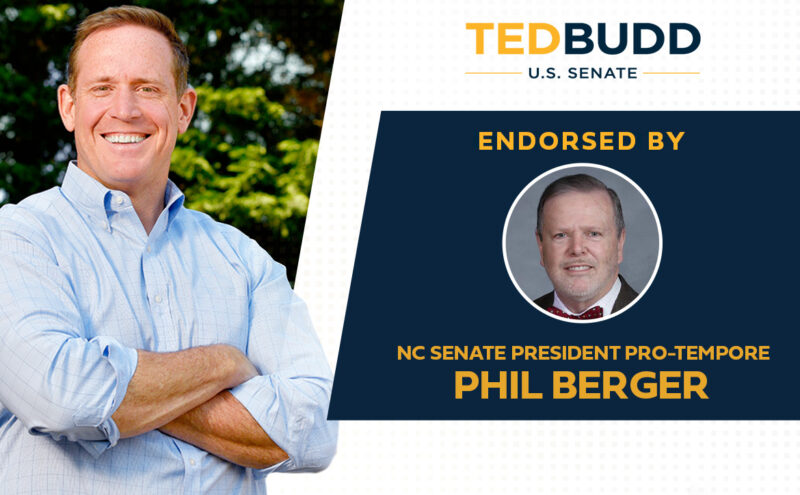 NC Senate President Pro Tempore Phil Berger: “Ted Budd is the only candidate with a record of job creation and standing up for working people.”

(Advance, NC) – The Honorable Phil Berger, the NC Senate Pro-Tempore (Pro-Tem), today endorsed Ted Budd for US Senate. Berger, working in conjunction with then-NC Speaker Thom Tillis and later with NC Speaker Tim Moore, is widely credited with leading the charge for historic tax and regulatory reform over the past decade yielding unparalleled economic growth which helped land an automobile manufacturer in NC.

“North Carolinians will decide control of the U.S. Senate this November,” said Berger. “That’s why it’s imperative Republicans nominate an electable conservative candidate, and that candidate is Ted Budd. Voters across the state are telling me they’re concerned about our country and President Biden’s harmful policies which are damaging the economy, inflating the cost of essentials, and creating a disaster on our southern border. Ted is the only candidate with a record of job creation, fighting for commonsense immigration measures, and standing up for working people. Ted Budd is the best choice for U.S. Senate and I’m proud to endorse him.”

“I’m running for the US Senate because, just like a lot of North Carolinians, I am deeply concerned about the direction our country is going in,” said Ted Budd. “Phil Berger felt the same way about North Carolina when he chose to seek office and he has made a huge difference for our great state. Whether he was opposed by Democrats or certain Republicans who shall remain nameless, when they stood in the way of greater economic growth opportunities for North Carolinians, Phil Berger did not back down from doing what’s best for North Carolina’s working families. He’s a Conservative Fighter just like me. I appreciate his service to North Carolina, and I am honored to have his support for US Senate.”

Ted Budd has now been endorsed by:

Meanwhile, in the fourth decade of his political career, McCrory has been endorsed by no one, but has managed to secure the support of Prominent-Never-Trumper Larry Hogan, the Governor of Maryland.

*C’mon…you’re gonna tell me that Phil Berger (and Tom Apodaca) didn’t run the show during McCrory’s only term as Governor? Or did you think maybe I was referring to the head of that big Charlotte lobbying firm where McCrory collected a paycheck and directed initiatives strategically (but did NOT lobby 🙄).