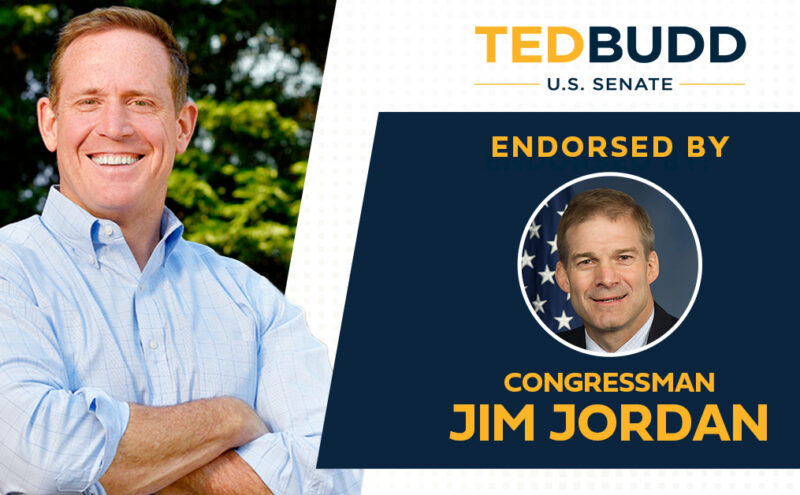 “Ted Budd is the solid Conservative.”

“Ted Budd is a rock-solid Conservative and a warrior for everyday Americans,” said Jordan. “Ted Budd knows how to win the tough battles needed to turn our country around.”

Jordan helped found and was elected by his colleagues to chair the House Freedom Caucus. He is focused on his oversight role, helping lead investigations into federal agencies, like the IRS, that overstep their roles. In Congress, Jordan has fought for fiscal responsibility, authoring the Cut, Cap and Balance plan get the country’s finances back on track. As a House Budget Committee member, Jordan offered more spending cuts than any other Member of Congress, and as the Republican Study Committee Budget/Spending Task Force Chairman, Jordan offered the only balanced budget of any member of the House or Senate.

“Jim Jordan is a man that Amy Kate and I greatly respect,” said Ted Budd. “When we first discussed me possibly running for Congress, Amy Kate told me how impressed she was with how Jim Jordan conducted himself in Congress. Jim is unapologetic in his fight for conservative principles, and we are honored to have his support for our campaign for US Senate.”

Ted Budd is a small businessman raised in Davie County where he and his wife, Amy Kate, live today with their three children and Boone, their dog. Ted was elected to Congress along with President Donald Trump in 2016 and has established a strong, conservative record supporting efforts to secure our borders and stand up for America-First policies that protect American jobs and increase opportunities for working men and women across North Carolina. Ted has spent his career as a small businessman and presently owns and operates a gun store and training center.