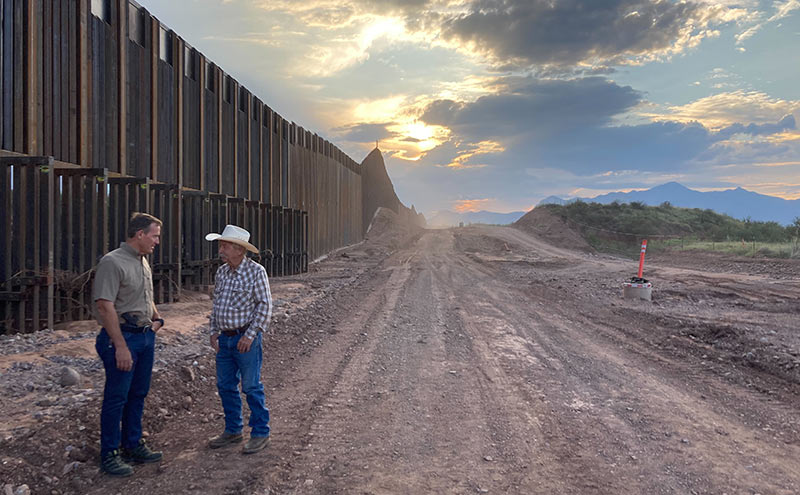 As if by magic, there’s already a campaign video about it! Click here to watch that magic happen. And yes, before you even ask, Ted is carrying a firearm in the clip. The southern border is a dangerous place, even more so under the Biden-Harris Administration.

“Protecting NC jobs and families starts right there at the US Southern border,” said Ted Budd. “Recently, I had the opportunity to experience first-hand, the challenges faced by our US Border Patrol agents and visit with these good folks. They are doing hard work under some of the toughest conditions. I’m honored to have the support of the organization that supports these agents, the National Border Patrol Council, for my campaign for US Senate. I supported President Donald Trump’s efforts to make our borders more secure and when I’m in the Senate, I’ll vote to stop Joe Biden’s reckless open-border policies and, yeah, I’ll vote to finish the wall.”

On behalf of the men and women of the National Border Patrol Council, NBPC is proud to endorse Ted Budd for U.S. Senate because we know he’s got the backbone to get in there and fight for a secure border. Our members have been working to secure our nation’s borders for more than two decades and, too often, we’ve seen career politicians be willing to talk a big game whenever election season rolls around only to go soft in the knees when it’s time for action. Ted Budd is not that kind of politician. Ted Budd is the kind of leader who has been fighting since he was elected to build the wall and get the resources needed to safely secure our Southern border. We face a lot of challenges, and we know that Ted Budd will help us, not abandon us.

National Border Patrol Council members have a tough job, and we need people in the U.S. Senate who will champion us, not scapegoat us for their political failures. NBPC members play an important role in securing our border and ensuring that our hometowns are safe for Americans and those that follow the law and seek to become Americans. Allowing a lawless tent city, the way the Biden Administration did earlier this year is completely unacceptable. The NBPC is endorsing Ted Budd for U.S. Senate because he will fight for us to simply be able to do our job. But just as importantly, Ted Budd gets it. Securing the Southern border is no longer just a problem for a few border states, it’s a problem for all fifty states. Ted Budd understands that and there’s no doubt he will fight for border security.

Political Commentary from the Political Guy

Even in this divided primary season, there’s pretty much universal agreement among NC Republicans that securing the Southern border must be a, if not the, top priority for the next US Senator from NC,” said Jonathan Felts, Senior Advisor to Ted Budd for US Senate. “Heck, even Governor McCrory knows we’ve got to secure our borders, so it’s got to sting a bit to know the folks actually defending our border don’t think McCrory is up to the task. Instead, the hard-working folks at the NBPC believe Ted Budd is the right man to help them do their jobs and secure our border. The NBPC endorsement is going to carry a lot of weight with the people of North Carolina on Election Day.